A Grand Tale of Seanchai Folklore: A Tribute to Little Gran

More than a pub name, Seanchai storytelling is an art form and a way of life.

When I ‘made a face’ (a scowl or was talking tripe) as a kid, which unfortunately adults had to put up with (apologies in advance), I, and many others were spun the old Irish saying; ‘If the wind changed, your face will stay like that.’

So, the years preceding youthful innocent wisdom, (which beset my young mind at the tender age of ten years or so, can’t be sure) I believed naively that very Gaelic tale. Yes, I actually believed that my face, when infused by sin and riddled with Catholic guilt, would remain fixed in place like a statue, forever unchanged, until a time, should the Heavenly Father (God forbid) decide to pardon my petulance and arrogance and allow my face to move a muscle to grimace, let alone, asking too much of Him and perchance to smile.

Back then, it was a case of prayers and serious things; and tales, knowledge, myths, old Irish sayings, Catholicism, religion, doctrine, dogma and faith. For years, webs of tales (and facts, mind you) were bestowed upon our young minds of innocence and divilment in more measures than we could muster to challenge, let alone comprehend or critically analyse to sieve the facts from the fiction. Again, the age of ten or twelve being a grand age; at the time, a grand age for what I wasn’t sure; but tales hadn’t got the better of me then at ten. With no penny farthing to my name, I reasoned twice shy, that no goose had laid a golden egg either.

So tales, like cries of the Banshee, were spun and swapped and some resonated more than others. Facts being few and far between were embellished with childlike wonder. From pagan myths to Irish tales, old Irish sayings and legends, we were filled with folklore of the Legend of Cú Chulainn’s strength and hurling prowess (see below); the lonely, isolated and miserable Children of Lir; and the inspiring warrior, Fionn Mac Cumhal.

For t’was the legend of Cú Chulainn which was the most memorable tale that I swallowed whole. As far as my imagination stretched, the tale of this GAA playing boy Setanta told by a primary school Storyteller, was substantial and not as far fetched as leprechaun tales, druids and faerie-forts. So, in my agile mind of stories, mathematical tables, Gaeilge, homework and digestive biscuits, Setanta’s plight was a tale worth remembering. Plus, it was always safer to have a busier mind than a busier mouth in those days. A brief synopsis, to jog your memories, goes something like this:

Setanta, as a young boy longed to be a member of the famous Macra, which was where his uncle, King Conor Mac Nessa had a training ground in his Kingdom at Emhain Macha, to train warriors. Gifted at the Gaelic sport of Kings, hurling, it was Setanta’s ability with the hurl and sliotar, which attracted the attention of King Conor. When Setanta, only a newbie to the Macra culture, jumped in to hurl spontaneously, which caused strife amongst the boys, it was Setanta’s warrior-like ability to fend off the angry boys single-handedly which impressed King Conor the most (unaware that Setanta was his nephew).

King Conor welcomed Setanta to the Macra and invited him to Culann’s fort, as a reward for his hurling prowess (after witnessing a hurling match earlier on). Earning the title Cú Chulainn after killing Culann’s fearsome hound, which was set loose mistakenly, Setanta vowed to protect Culann’s fort until a replacement hound was found. Thus, the new name, the hound (Cú) of Culann was born: Cú Chulainn. To delve deeper into Cú Chulainn’s heroic tale, click here.

Growing up with treasured Gaelic traditions of Old, beleaguered teachers were our main primary source of tales being natural Storytellers or Seanchai (some being more natural than the mechanical monotony drone-like drivel of others). Originating from the Scottish and Manx Gaelic (seanchaidh), the word ‘Seanchai’ meaning storyteller or a bearer of old folklore, described the pagan tradition of passing on stories and tales amongst tribes from one generation to the next; the chief storyteller being the Seanchai.

If only the vocation of a Seanchai paid well in those days, you’d consider it as a viable occupation; grander than jam-making and turf-cutting, but not holier than thou of a GAA dynasty. Back then, there were no billionaire connections to the 1.25% loans of the Celtic Tiger to keep you pre-occupied. Us ordinary folk had to make do with saving pennies for penny sweets and the like; a far more healthier affair – no interest rates and morally enjoyable. Although, fishing out change from those piggy banks were a nuisance on your nails, mind you. I digress.

Anyway, many’s an unpaid Seanchai we had in primary school who fed us folklore fables for free along with our two times tables. For more info on the Art of Storytelling of the Seanchai, click here.

My Granny, knighted a Seanchai by blood, was fond of and personified this archaic tradition. Below, is a sample of my Granny’s ‘lore, an Irish tale, which was passed on to her, a song James McGlynn. Agnes, (RIP little Gran) transcribed this tale at the ripe old age of 14 years; a tale which was recollected and collected from her Mum, at the time, aged 60. 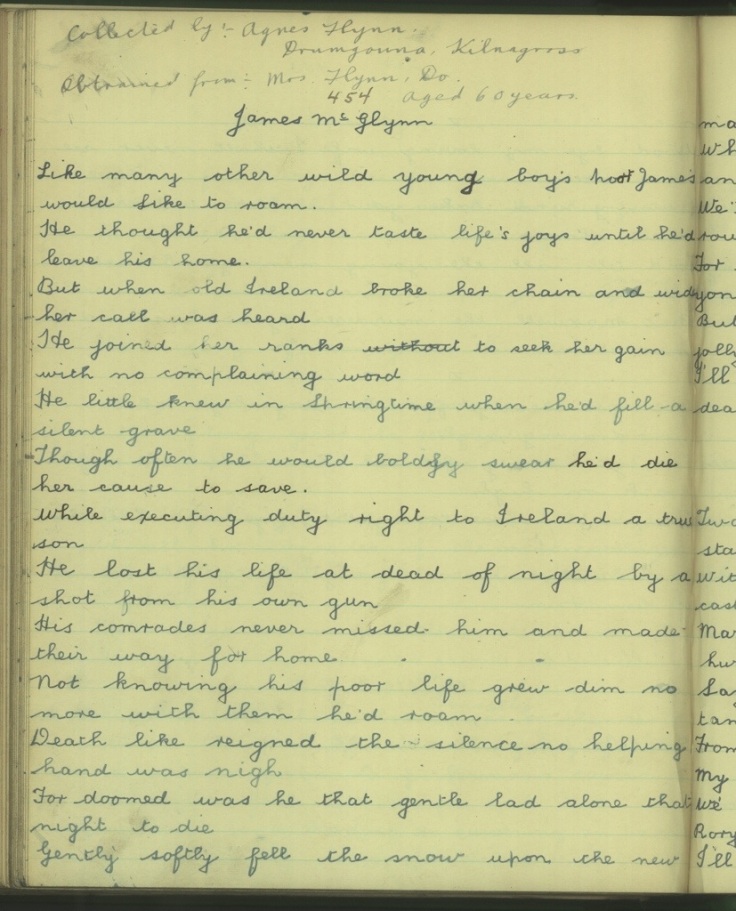 The song James McGlynn (above) is one of many living remnants of Gaelic folklore in our family, others being handwritten old poems. The old song, James McGlynn was only recently made available to Ballinamore library and passed down to us, the 90s generation of cousins in our family. Our family, stemming from Lovely Leitrim** (as the song goes), along with many other Leitrim families, have now, thanks to the Internet of Things, online access to old tales of yonder. **cough* Don’t hold the marriage referendum vote against those gentle country Leitrim folk. More Leitrim tales can be accessed here.

**Note: For those of you non-culchie/non-country folk who haven’t ventured beyond the Pale (though embarked to cross the Liffey in some sort of Starbucks form), I encourage you to take heed of the Old Irish saying: ‘A goose never voted for an early Christmas’ and to bear in mind that those curious country Leitrim folk had broadband access far longer than you think they had the TV ‘poverty channels’ for. Anyways, ‘you’ll never plough a field by turning it over in your mind’.

So, to turn the sod of my Grandmother’s inherited tale into an antiquated memorial, in the spirit of appreciation of archaic rhymes and joyous traditions, now is a time of reminiscence and of remembrance.

As a child trying to make a life, I have fond memories of my Grandmother (little Gran) silencing a room joyfully with her own favourite tale, of which I will share and pass on. From James McGlynn, the Old song of her Mother; as a party piece, my Grandmother expended her different chosen adopted Gaelic tale ‘A Pennyworth of Lies’.

Bespectacled, softly spoken and splendidly gay in an old-fashioned cute as a button way, she romanticised the banalities of Irish life in her ‘lore, enjoying being the centre piece. She declared this tale upon souls towards the end of nights before a hushed room, where fires of joyous imaginations danced in Irish eyes. She had us captivated by her nonsensical narrative. Even if we couldn’t understand the meanings behind her rapture, we observed her enthralling dance of words and the sparkle between her nose, in her eyes of her ‘Pennyworth of Lies’. Below, is a sample of said Irish yarn, which I will try to pass down to the next generation of God knows what.

An’ I axed him then where John lived, and he toul me
He lived in the parish of Up and Down
where a mad dog bit a hatchet
An’ he said that it was up in a high hill
down in a low hollow
Where the wind never blew nor the cock ever crew

A wee house, he said, standing alone
With about forty or fifty houses standing beside it.”

3 thoughts on “A Grand Tale of Seanchai Folklore: A Tribute to Little Gran”